The Mars Reconnaissance Orbiter, launched in 2005 is currently orbiting Mars on active exploration. The NASA spacecraft has achieved many milestones, such as 60,000 orbits around Mars, 375,000+ images taken and tracking 3 landed missions during their final descent.

Where is Mars Reconnaissance Orbiter now?

The speed of the Mars relative to the Sun is --,--- (--,---, --) . Note that this varies a little from the MRO probe as that moves a little to and from the sun during it's perpetual orbit around the planet Mars. 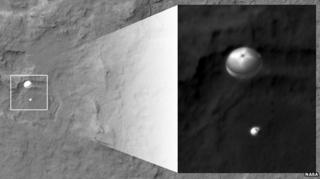 When does the mission end?

MRO's mission was planned to end in 2007. Thanks to it's rugged and over-engineered design, the space probe is still going strong, and collecting more science that helps towards our understanding of Mars and the solar system.

Check out the simulation, where you can observe and track the orbit of the Mars Reconnaisance Orbiter, and explore the solar system.