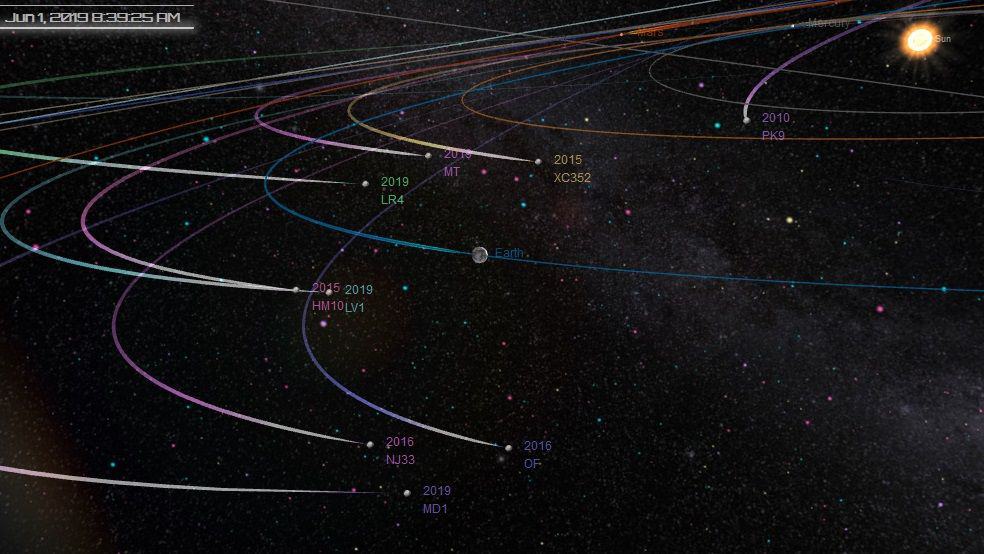 New asteroids are being detected every day. A number of these are classified as Potentially Hazardous. These are the latest known Close Approaches.

Note: these may take a couple of seconds to load

The 3D simulation on this page will help you to understand the positions of close asteroid approaches in our solar system and gives you real-time information about the position w.r.t sun and earth, speed, direction, size of the different planets and asteroids moving around the sun. You can play with it and get views of the solar system from different angles.

Note: at times there is disagreeance between International Astronomical Union data and NASA data of orbits.

There are over 20,000 known Near-Earth asteroids (NEA). Most of these Asteroids orbit in the region between Mars and Jupiter. Near Earth Objects (NEO’s) have become of increased interest since the 1980s because of greater awareness of the potential danger.

For example, on June 30 2019 NASA spotted the asteroid named, ASTEROID 2019 MT2, which was dangerously approaching towards earth eight days later.

When orbits of some of the NEO’s intersect that of the earth, there is a possibility of the collision and can cause a significant damage -hence are classified as potentially hazardous objects (PHO) or asteroids (PHA).

How do spacecrafts avoid hitting those asteroids in their space missions?

Well there is way out for spacecrafts to avoid any kind of a collision with those objects.

You should not be too much concerned about the earth being hit by NEO’s, as this threat is very small compared to the threats from diseases and accidents on roads.

Our Defense plan against NEO

NASA and other institutions around the world are trying their best to develop an efficient defense system to protect our earth from NEO’s collision.

For any efficient defense system we need to
1. Detect the PHA’s
2. Track and characterize PHA’s
3. Know when and how to deflect a threatening asteroid.

What are the other possible options to protect earth from NEO’s?

These may include…
1. Destroying the PHA by a nuclear bomb. But this option is not safe according to many experts.
2. A spacecraft that can intercept and pull it away from a collision course.
3. (Solar collectors) Concentrating the sunlight on the asteroid… just like kids burn paper with convex mirrors. This can evaporate the material from the object and provides the necessary thrust to push the object/asteroid away from earth.