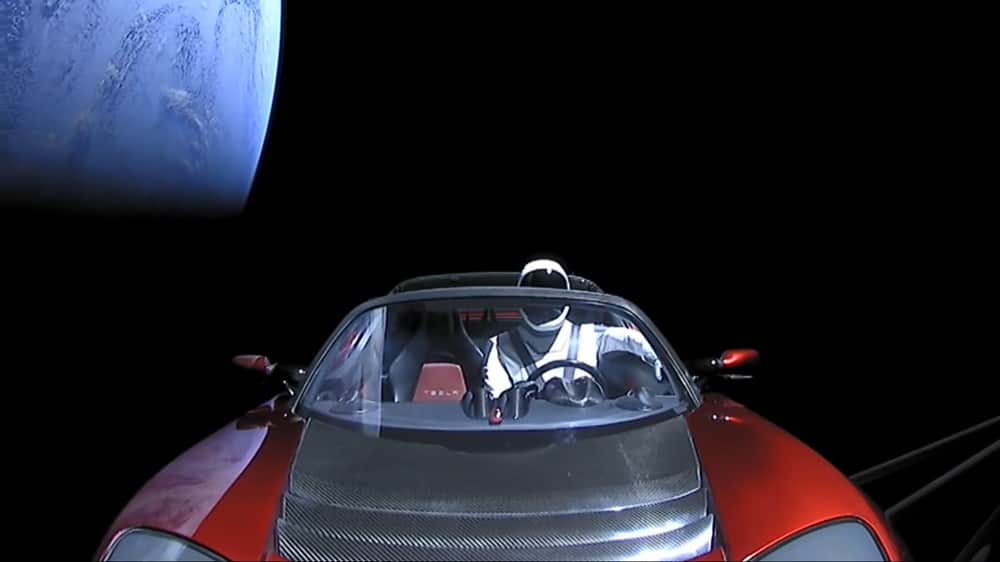 In February 2018, Elon Musk launched a Cherry Red Tesla Roadster into space to the tune of David Bowie’s “Space Oddity”. SpaceX wanted to use something fun and silly for the dummy payload of the first Falcon Heavy rocket test flight, so they used a 2008 Tesla Roadster, with a dummy doll inside of it named “Starman”. The Roadster was the one that Musk himself used back then for commuting to work. The weighs in at about 1,305 kg and is currently going --,---. On August 17th 2019 he completed his first orbit around the sun.

Where is the Tesla Roadster now?

How fast is it going? Currently Starman is travelling at --,--- around the sun, which is --,--- every second. The fastest car ever! It’s also going 20 km/h faster every day.

The Roadster is currently moving towards Earth at a speed of about --,---. The Roadster passes near Earth roughly every 2 years and 9 months.

The aim of the flight

The test flight mission was to demonstrate the performance of the Falcon Heavy rocket, and its ability to operate as a reusable rocket. Starman and the Roadster was just the test payload of the rocket. Musk stated that the purpose of launching the car was to spread the message of one day spreading humanity to other planets. He is hoping to inspire the world.

So far, the Roadster has made a couple of milestones in terms of planetary approaches. The furthest distance from the Sun was reached at 247 million km (1.655 AU) in October 2018, and a close approach to Mars in September 2019 at almost 100 million kilometers (0.65 AU).

Another close approach to Mars is set for Oct 7, 2020. Starman is currently --,--- from the Red Planet. A 2018 study highlighted that there is a 6% chance of the Roadster colliding with the Earth over a 3 million year timespan, and a 3% chance that it will collide with Venus. In August 2019, Musk stated that someday, SpaceX may launch an additional spacecraft to follow the roadster for imaging.

The batteries on the Roadster have been empty since about 12 hours after launch, according to Elon Musk in a post-launch briefing at Kennedy Space Center, shortly after launch.

When will Starman’s Tesla Roadster arrive at Mars?

Elon Musks’ projects can always be expected to have some kind of bizarre quirk to it (like his tunnels under Los Angeles, or his flamethrowers), which is what makes them so exciting. Musk launching a car into space with a test dummy in it once again showed his eccentric and “mad scientist” personality, boosting public appeal for SpaceX as well as general interest in space exploration. Additionally, NASA officially declared the car to be a celestial object in their database.

However, Elon Musk didn’t launch the Roadster with the intention of it being a marketing ploy for the Tesla company, or as a means to heighten his public image. Shortly after the launch, he discussed that the purpose of the stunt was to ultimately get people interested and enthusiastic in space exploration. His goal in his own words was for society “to get excited about the possibility of something new happening in space — of the space frontier getting pushed forward.” During the Space Race of the mid-20th century countries around the world went all in on going to the cosmos. Ever since the general interest of space exploration and astronomy has decreased—but thanks to minds like Elon Musk, that has started to change in recent years, and will continue to change.

3. The random walk of cars and their collision probabilities with planets

7. Elon Musk explains why he launched a car to Mars – and the reasons are much bigger than his ego