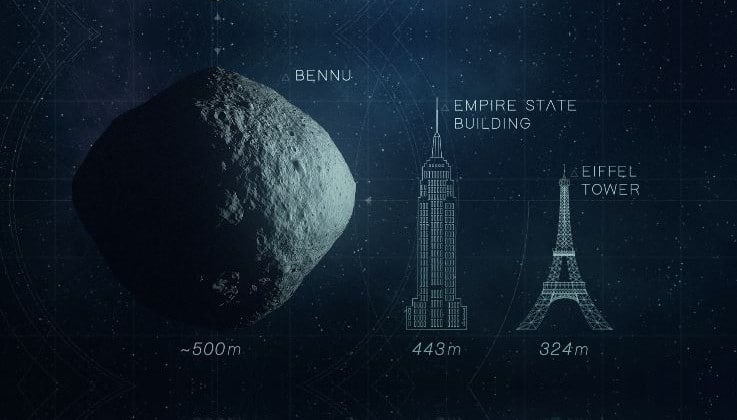 Bennu’s size is 492m. When asteroids like this have a collision with Earth it can cause potentially huge damage, depending on the size. The United States currently has a Spacecraft at Bennu. OSIRIS-REx is orbiting Bennu at the moment, and plans to take a sample back of the asteroid to earth for analysis.

But where is asteroid Bennu right now?

When will meteor Bennu hit earth?

It will hopefully fly by earth on Sun, Sep 25, 2135, which is about 41,000 days from now. Current predictions have is pass within 367,353 km of earth, which is 1x the distance to the moon. The chance of hitting earth is set at 1 in 2,700. The odds seem to be in our favour, but if the predictions are wrong, the 79 billion kilogram space rock called Bennu could hit earth in a giant collision.

Theoretically a meteor impact should only happen once or twice a century. The reality is however that given the incompleteness of the near-Earth-object (NEO) catalogue, an impact could occur at any time. There are thousands of NEOs larger than 140m still to be found.